Russia's next humanitarian aid convoy may arrive in Luhansk, Donetsk by November 30 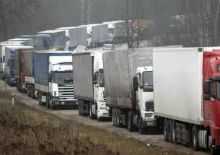 The Russian Emergency Situations Ministry plans to deliver the next batch of humanitarian supplies to the self-proclaimed Donetsk and Luhansk People's Republics by November 30.

"Another batch of humanitarian aid is already being prepared. It is already being loaded onto trucks. According to our plans, this convoy will arrive in the Rostov region on November 28 evening," Russian Deputy Emergency Situations Minister Vladimir Stepanov said.This cargo will primarily include construction materials such as slate, glass and roofing felt, food, as well as "fuel for the emergency services" firefighters and ambulances, Stepanov said."We plan to send more than 100 trucks carrying over 1,000 tonnes of supplies," the deputy minister said.

The condition of winter grain crops in Ukraine was evaluated as good and satisfactory on 82% of fields or on 5.8 million hectares, the Agricultural Policy and Food Ministry has reported.

According to the ministry's report, 18% of the sprouted crops on 1.3 million hectares were weak and thinned.The ministry said that crops did not sprout on 857,500 hectares (11% of fields). The largest amount of such fields is in Odesa, Mykolaiv, Kirovohrad and Luhansk regions.