Short news from Ukraine: an economic disaster, corruption and war 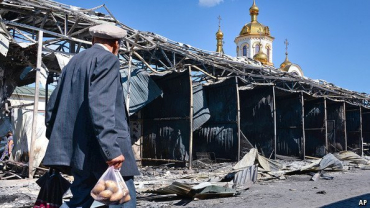 President Poroshenko urges Russia to withdraw troops from Ukraine, close border
11 декабря 2014 г., 15:29:00
"Please withdraw your troops from my country. Please release all hostages and close the border. And I promise: if you close the border, then within one or two weeks we will have peace and stability in Ukraine. It's very simple," Ukrainian President Petro Poroshenko said in Canberra on Thursday at a joint press conference with Australian Prime Minister Tony Abbott.

Separatists continue violating ceasefire
11 декабря 2014 г., 14:33:00
In defiance of the ceasefire declared in Donetsk and Luhansk regions on Tuesday, illegal armed groups continue to shell positions of government troops as well as villages and towns.

EU to strengthen sanctions on Crimea
11 декабря 2014 г., 12:54:00
The EU will strengthen its sanctions against the tourism industry in Crimea, as well as the exploration of oil and gas on the peninsula, Reuters has reported, citing a draft decision by the EU.

Premier: Budget deficit almost UAH 70 bln
11 декабря 2014 г., 12:30:00
The government keeps deficit of the state budget within the frames of UAH 68 billion, which is about 4%, Prime Minister Arseniy Yatseniuk said, speaking in the Verkhovna Rada.

Sweden allocates $664,000 as aid to Ukraine
11 декабря 2014 г., 10:43:00
Sweden has signed an agreement with the United Nations Office for the Coordination of Humanitarian Affairs (UNOCHA) to provide $664,000 as humanitarian assistance to Ukraine, Swedish Ambassador to Ukraine Andreas von Beckerath said on his Twitter page.

NATO to train sergeants for Ukrainian army
11 декабря 2014 г., 9:46:00
NATO is beginning the work on training sergeants for the Ukrainian army; substantive negotiations on this issue between representatives of NATO and the Ukrainian Defence Ministry will begin on December 15, head of the group of advisers from NATO on reforming Ukraine's military education, retired General Boguslav Pacek, told Ukrinform agency.

Government program considered in parliament
10 декабря 2014 г., 14:53:00
A draft resolution on the Program of the Cabinet's activities is registered in the Verkhovna Rada, by which the parliament is proposed to approve it.

Poland says too early to resume cooperation between NATO and Russia
10 декабря 2014 г., 14:38:00
Poland currently sees no signs in Russia's actions that would help resume normal cooperation between NATO and Russia, Polish Foreign Minister Grzegorz Schetyna said at a conference "The Next 15 Years: The Future Polish Priorities in NATO," Ukrinform reports.

Talks on setting date for next round of Minsk negotiations ongoing
10 декабря 2014 г., 13:15:00
A new round of peace talks, involving Ukraine, pro-Russia separatists, Russia and representatives of the OSCE is aimed at seeking a solution to the conflict in eastern Ukraine.