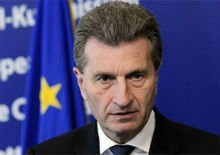 Slovakia's approaches towards the subject of reversing Russian natural gas supplies to Ukraine do not contradict Bratislava's agreements with Gazprom and the Russian government, Russian Foreign Minister Sergei Lavrov.

"We are certainly following the discussion of the subject of gas being reversed from the countries buying it from Gazprom, because there are relevant intergovernmental agreements, there are contracts. And that the way the Slovak leadership has approached is absolutely no violation of any agreements with Gazprom and the Russian government," Lavrov told a press conference after talks with his Slovak counterpart in Moscow.

EU will support Ukraine on issue of payment for gas, Günther Oettinger says

Herewith , the European Commissioner emphasized the interest of the European Union in solution of issue of gas payment by Ukraine The next trilateral meeting between Russia, the EU and Ukraine on gas issues will take place next week, May 26.