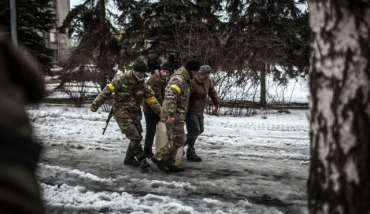 Fifteen Ukrainian servicemen have been killed and 30 others injured in the area of the military operation in southeastern Ukraine over the past 24 hours, Ukrainian Defense Minister Stepan Poltorak has saidat a briefing in Kyiv on January 31.

"Fifteen servicemen have died. This concerns the entire contact line, from Luhansk region to Mariupol," Poltorak said.Thirty other servicemen have sustained injuries of various degrees, he said.Combat activities are continuing near Debaltseve, Donetsk region, Poltorak said, admitting that this town is "partially controlled" by militants.

The Ukrainian National Guard has denied information that its troops have left the city of Debaltseve, Donetsk region, where fighting has been going on for several days now.

In the meantime, Alexander Zakharchenko, the head of the self-proclaimed Donetsk People's Republic, claimed earlier on Monday that the Ukrainian troops were attempting to retreat from Debaltseve.

Ukrainian President Petro Poroshenko, German Federal Chancellor Angela Merkel and French President Francois Hollande insisted on the immediate ceasefire in Donbas in their telephone conversation, the Ukrainian presidential press center said. The three leaders demand the immediate ceasefire amid "the ongoing escalation of the conflict and the growing number of civilian casualties," it said.

Besides, Poroshenko, Merkel and Hollande called for "restoring every provision of the Minsk agreement as a foundation of the peace process in Donbas," the press center continued.The leaders of Ukraine, Germany and France agreed there must be no preconditions for convening a Trilateral Contact Group meeting.Poroshenko, Merkel and Hollande said they were disappointed by the Contact Group's failure to make progress at its latest sitting in Minsk.The three chiefs of state pledged to carry on close coordination of their steps towards peace in Donbas.