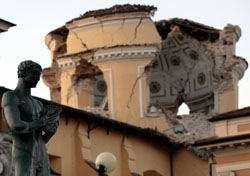 In the past years different natural disasters like earthquakes, floods, hurricanes, and violent storms have occurred worldwide with increasing frequency. Not so long ago the whole world was stunned by a tragedy that happened in the Italian city of Abruzzo that found itself at the epicenter of an earthquake, Italy’s worst in the past 30 years.

Each day we receive alarming news from the city: nearly 280 casualties, a few dozen people missing, fears of new quakes, etc. Some scientists believe that disasters like this occur as a result of human technological impact on the environment that led to the global warming. Others claim that this is a result of the objective regularities in the earth’s development. For example, not that long ago climatologists from Swiss Federal Research Institute suggested that in 1000–1400 A.D. there already was a global warming in Europe, but then, as it is well-known, people did not influence the environment with their activities as much.

The worst of it is that in most cases nobody can predict when natural disasters, including earthquakes, will hit. Terrestrial activity researchers at the Subbotin Institute of Geophysics in Kyiv say that seismologists can only estimate the level of earthquake shocks in all regions; the rest is defined by nature. Oleksandr KENDZERA, deputy director of the Subbotin Institute of Geophysics, told The Day about whether there is a seismological danger for Ukraine and how we can save our life when a natural disaster hits.

Mr. Kendzera, apart from the Carpathian and Crimean mountains, are there regions in Ukraine where people can feel the earth shocks and suffer from them?

“Most of Ukraine’s territory lies in seismic regions with different intensity of terrestrial activity. There are a few regions of seismological risk in Ukraine. These are, above all, the Carpathian Mountains, the southern coast of the Crimea, most of the Carpathian region, Bukovyna, almost all of Odessa oblast, part of Kirovohrad, Vinnitsa, Lviv, and Ternopil oblasts, and also the Donbas. The seismological risk is higher in the western parts of the country. The reason for this is that Ukraine is situated on the edge of a very powerful seismic belt of the planet. It stretches from the Azores through the Mediterranean Sea, covers a part of Ukraine, and then goes through the Caucasus, the Black Sea, and turns to Sumatra, where a powerful earthquake took place recently. Regions that pose a seismic risk, i.e., where earth shocks with the magnitude of six to nine on the Richter scale can occur, account for about 20 percent of Ukraine’s territory and the population of about 10 million.”

Have earthquakes with the magnitude of six to nine ever happened on the territory of Ukraine?

“Major earthquakes are quite rare. It may take decades and hundreds of years for something like this to form under the ground; this is also true for Ukraine. The biggest earthquake that has happened relatively recently struck the Crimean Mountains in 1927. Then the entire Black Sea coast was essentially destroyed. In 1875 another significant earthquake hit the northern part of Lviv oblast. It did not lead to great destruction and many casualties because at that time the houses were made of wood. However, there were huge rifts on the surface, which could be a great problem if there was something or somebody in that place when the shockwave hit. These were magnitude 6 earthquakes. The thing is that a magnitude 6 earthquake belongs to the second category and can be more destructive in loose-soil areas.

The latest earthquake of this magnitude happened in Mykulyntsi, Ternopil oblast, in 2002. A couple years ago a magnitude 4 earthquake shook the ground near Kryvyi Rih.”

Is there any pattern in earthquake occurrence on a certain territory? Can scientists predict them?

“Scientists can predict an earthquake’s magnitude in any part of Ukraine. The state standard “Building in the Seismic Regions of Ukraine” contains this information. The Institute of Geophysics developed a special method to estimate the potential seismic risk for every building. Engineers have to design every building taking into account the real seismic risk in every part of the country.

“If especially important constructions are being built, seismic microdestruction is analyzed, concrete regional conditions that can strengthen or weaken various earth tremorі are taken into account. This is done in order to avoid building a construction that will resonate with these tremors. Numerous casualties are caused by poor constructions rather than earthquakes. That is why it is extremely important to design earthquake-proof buildings and estimate the seismic resistance of the already existing buildings.

“Buildings in the regions of seismic risks used to be designed so that they could withstand magnitude 6 earthquakes, whereas there are no estimates of the risks in the regions where the earthquakes of lower magnitude could happen. However, it is obvious now that the old buildings can be destroyed even if a very mild earth shocks hit.

“The occurrence of an earthquake is impossible to predict and no one in the world actually does it. Anything can be predicted only if a reliable model of the phenomenon can be designed. For example, earthquakes that happen in the Vrancea zone in Romania can be dangerous for us start. They occur 180 kilometers under the ground. That is why there is no way to design a model. One can get information about underground processes that cause earthquakes only if he interprets observation data regarding physical fields on the earth’s surface. There is no model to predict earthquakes, hence there is no forecast.