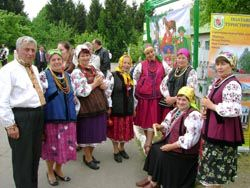 The Union for the Promotion of Rural Green Tourism Development in Ukraine was accepted into the big family of the European Federation of Farm and Village Tourism EVROGITES.

The Law of Ukraine “On Tourism” and “On Private Village Farms” enabled the owner of a village farmstead to provide services in the sphere of rural green tourism. The program “Green Farmstead” was introduced for the ecological usage of village homes, as was the program of voluntary categorization in the sphere of rural green tourism “Ukrainian Hospitable Farmstead.” With the purpose of popularizing agrotourism in Ukraine, the formation of favorable conditions for its development, increasing the quality of services provided by individual and collective actors, and the preparation of rural tourism objects for hosting the football championship Euro-2012 a contest “Ukrainian Hospitable Farmstead-2010,” was announced.

The Union accomplishes its laborious daily task of reviving villages, their social and economic potential, the primordial customs and rites, and culture of Ukrainian people. Wealthy people amidst picturesque nature are our most valuable treasure, and the Union nourishes this treasure with its work. During tourist trips an active dialog between city, village, and regions of the country was established. Peaceful and harmonious people of different nationalities live beside the titular ethnic group.

Initiated in 2003, the annual all-Ukrainian rural green tourism exhibit-fair “The Ukrainian Village Invites” assists in promoting such relations. Every owner of an agricultural farmstead brings a part of their land to the exhibit, and has an opportunity to show the material and spiritual culture of their village, ancient rites, and common law which we lack so much in our present everyday communication and coexistence. This is particularly salient for big cities. In this context, villages become an example of politeness, high morality, and fair and respectful attitude to each other.

The importance and attractiveness of green tourism is growing rapidly around the world. About 10 percent of global gross revenue comes from the international tourist industry. The annual income of tourism is around 500 billion dollars, and growth up to one trillion is predicted in 2010.

Agrotourism is the sector which has the most potential in Ukraine. It could make a considerable contribution to the economy of villages, in the form of new jobs, growing revenues, and increased tax revenues; it helps reduce import and intensifies the use of local raw material resources.

Agrotourism is distinguished from other types of export by one important aspect. Most exporters ship their goods out of the country. In tourism the consumers come to the country in order to purchase and consume manufactured products and services. It brings income to the local economy.

Under the conditions of unfavorable internal and external market conjuncture and a stagnation of manufacturing, Ukrainian villages face the worst situation. Unemployment spreads, social infrastructure declines — less than a third of enterprises providing general services is left. A demographic crisis aggravated as a result of the social-economic decay of village. As the practice of developed countries shows, non-agricultural types of activity can help to overcome such negative tendencies. First of all this concerns those which don’t require state investments, but can be satisfied with the use of available rural territories, private housing fund, and material means. Besides current owners who provide services of agro- and eco-tourism, create jobs for residents of villages engaged in embroidery, carper-making, pottery, weaving, engraving, Easter eggs painting, blacksmith’s work, vegetable growing, gardening, beekeeping, livestock raising, and horse breeding. Considerable organizational and methodical assistance to village residents in this activity can be provided by village, settlement, town, and raion councils which bear direct responsibility for the stable development of the territories accountable to them.

Current urban tourists prefer active rest in places with an ecologically pure environment and look for opportunities of cultural enrichment and self-education. Ukraine possesses huge tourist-recreation possibilities meeting these needs. Almost 15 percent of the territory is taken up by resorts, recreation zones, and mountain or seaside resorts. The Dnipro region green zones, with their wonderful healthy fresh air, clean rivers, mountains, territories, preserved national traditions, folklore, museums, churches and other beautiful architectural monuments, are a perfect example. There are over 500 settlements with a unique historical-cultural heritage. About 30 national and regional parks and homes of famous activists of Ukrainian culture are preserved by the state. There are outstanding resources – over 400 sources of mineral water and 100 deposits of curing mud — a big portion of which is unique not only to Ukraine but to Europe.

The average portion of the population able to work while living in villages constitutes 6.4 million people, over 0.5 million of them are officially registered as unemployed; 3 million people belong to the category of the unoccupied population.

If properly managed, such a big wealth of material and spiritual culture of Ukraine can bring a positive result for agrotourism before long. Namely: prosperity of village families will grow, incomes among the village population will be diversified, migration from the countryside will decrease, the spectrum of tourist services in Ukraine will broaden, income to local budgets will increase, competitiveness and attractiveness will rise, amounts of internal and external investments to rural regions will increase, and jobs in the fields directly or indirectly connected with rural tourism will increase. Youth, females, in particular, and other categories of the population will create their own business in the sphere of rural tourism.

But in order to consolidate such positive tendencies and provide a considerable push for the development of rural tourism, it is necessary to solve a number of urgent problems. First of all, it is necessary to elaborate a methodological normative and legislative base on determining the organizational conditions for providing agrotourism services within the framework of a private village farm. One must also provide recommendations on the voluntary categorization of housing intended for visitors. To introduce a system of privileged long-term loans for villagers for the development of rural tourism; to form suggestions regarding elements of corporate style for Ukrainian rural tourism identification. It is also important to create information infrasturture and technologies with information regarding clients database and informing clients about proposals on recreation services in village; create a state institution to promote abroad the entrance tourism in Ukraine generally, including rural green tourism; continue preparation of profile specialists, education and re-qualification of village hosts and unoccupied village population for the work in the sector of rural green tourism in the School of Green Tourism initiated by the Union for Promotion of Rural Green Tourism Development in Ukraine on the basis of Kyiv University for Bio-Resources and Natural Resource Use; to organize special classes in village public schools with the purpose of future personnel preparation for rural green tourism; to create on the level of the state and oblasts a computerized system for reservation of rooms in houses and services.

The law of Ukraine “On Green Tourism” would assist in solving legal and organizational problems for the realization of Ukraine’s state policy in the sphere of agrotourism; it was elaborated by the Union for Promotion of Rural Green Tourism Development in Ukraine together with interested structures, but is still not adopted by the Verkhovna Rada of Ukraine.

There is one more considerable reserve to replenish floating assets of rural farmsteads owners providing tourist services. Most of them have land, shares which they lease and get a miserable payment of fewer than three percent of the land’s, not taking into account its cadastral value, very cheap in other words. It’s high time to considerably increase rental payments for owners of land shares, perhaps up to 20 percent of the harvest worth. Then they will feel like real owners of their land, and unfortunate Ukrainian village will gradually shake off that yoke. Let’s not deprive the cradle of our nation of this hope.

Vasyl VOVK is a representative of the Union for the Promotion of Rural Green Tourism Development in Ukraine, Kyiv