Uzhhorod and Moscow are ready to collaborate 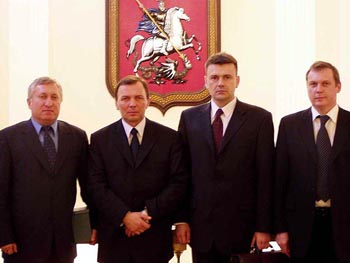 It is proved by the results of three days long visit of the official delegation of Uzhhorod to the capital of Russian Federation.

The Mayor of Moscow Yuri Luzhkov invited the delegation headed by the Mayor Viktor Pogorelov. Mr. Pogorelov says that preparatory work for the visit of the official delegation continued for last 9 months and it came up to expectations. Official delegation consisted of the Head of Tourism and Health Resort Board of Zakarpatska Oblast Administration, depute for Uzhgorod City Council, Mr. Sergiy Slobodjanuk; senior priest of Uzhgorod Orthodox Cathedral of Exaltation of the Cross archpriest Dymytriy Sydor; and businessman Fedir Sokhanych. Signing up of the Agreement about Friendship and Collaboration between Uzhhorod and Northeast district of Moscow, which population is 1 million 300 thousands and is corresponded to population of Transcarpathia, is the main result of Uzhhorod team visit. Prefect of the Northeast district of Moscow Irina Raber and the Mayor of Uzhhorod Viktor Pogorelov left their signatures under the Agreement.

As Mr. Pogorelov said to Reporter, several official and unofficial meetings to hold in Russia's capital showed that Moscow has serious attitudes to collaborate both in economic and humanitarian fields. In particular, two not-working Uzhhorod plants, TURBOGAS and Uzhhorod Plant of Mechanical Engineering, were presented for Moscow businessmen. Preliminary negotiations about equipping of the big anti-submarine battleship by ship furniture produced in Transcarpathia have been held. This battleship is about to be competed and is funded by the Government of Moscow. Also, preliminary agreement about holidays of children and high school students from Moscow in Transcarpathia and vice versa pupils and students from Uzhhorod in Moscow was reached. Member of Uzhhorod delegation the Head of Tourism and Health Resort Board of Zakarpatska Oblast Administration, depute for Uzhhorod City Council, Mr. Sergij Slobodjanuk says that signing of the Agreement about Friendship and Collaboration is extremely important event, because Moscow is the megapolis of 10 million people. It is a huge and perspective market both for consumption of ecologically clean Transcarpathian farm-produce and for providing tourist services. It a pity, but before the visit of Uzhhorod delegation for people of Moscow and for Russians in general, tourist Transcarpathia was mainly a white spot on the map of tourism. However, it seems things are changing now. There are several interesting projects in Uzhhorod and Transcarpathia about reviving of tourist exchange between Moscow and the most western regional centre of Ukraine. Now they are under expertise in the Government of Moscow. Because of that Mr. Sergiy Slobodjanuk is sincerely surprised by Ukrainian bourgeois nationalists' position and by their anticipating of ideology of the Common Economic Zone, which can improve financial wealth of Ukraine in general and Transcarpathia and Uzhhorod in particular. The third biggest Ukrainian minority in Moscow and presence of a number of Russians in the regional centre of Transcarpathia undoubtedly play a key role in the development of reciprocal relationships. The Mayor of Uzhhorod Mr. Viktor Pogorelov also can't understand Ukrainian politicians and businessmen who don't want to develop friendly Ukrainian - Russian good neighbour relationships. Considering a big number of season workers from Transcarpathia and Uzhhorod in Moscow, Uzhhorod delegation undertook consultations on their rights and guarantees with Moscow counterparts. The Head of territorial organisation of the Ukrainian Association of the Veterans of Afghanistan Mr. Sergiy Slobodjanuk had a long conversation with the prefect-assistant Mr. Sergiy Ivanovych Naumenko. He proved to be a veteran of Afghan war and a holder of Red Star order. Also they discussed public activity and peculiarities of the work of Afghan veterans organisations in Transcarpathia and Moscow.

During the official visit first assistant of the Mayor of Russian capital, the Head of Municipal Economy Complex Mr. Petr Aksionov, entertained members of Uzhhorod delegation. Activity of the Department of Housing and Municipal Economy was introduced for Uzhhorod team. Also incinerator plant has been visited.

Delegation of Uzhhorod also visited Cathedral of Christ the Saviour in Moscow and residence of the Patriarch of Moscow and all Russia - Danilovskiy monastery. Uzhhorod delegation had a meeting with archbishop of Kaluga Kliment at the Department of Foreign Ecclesiastical Relations. By the way, the archbishop proved to be a classmate of senior priest of Uzhhorod Orthodox Cathedral of Exaltation of the Cross archpriest Dymytriy Sydor.

Also delegation of the regional centre of Transcarpathia visited a newly built swimming pool in Alufievskiy district of Moscow and took part there in the ceremony of lay the foundation of the "Avenue of Friendship".

P.S. In point of view of the representatives of Moscow political and business elite, Uzhhorod delegation met with in Russian capital, now the attitudes to develop fruitful relationships with Russia can be seen only in Kyiv and … Uzhhorod.