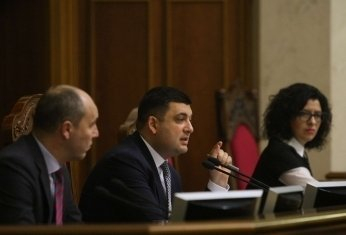 The Verkhovna Rada has adopted an action program of the Cabinet of Ministers. A total of 269 lawmakers voted for this decision at a parliament meeting on Thursday.

As reported, on December 9, the Cabinet of Ministers approved its action program for 2015-2016.

According to Prime Minister Arseniy Yatseniuk, "the ultimate goal is Ukraine's membership of the EU. But in order to achieve this goal we need to undergo serious tests, make radical changes, change Ukraine and make it European."

The Cabinet of Ministers action program, in particular, proposes adopting in the first quarter of 2015 a new law on civil service, a law on decentralization of power in the field of architectural and building control, as well as introducing amendments to the Budget and Tax Codes.

During the year it is also planned to introduce amendments to the Tax Code, which include a reduction in the number of taxes from 22 to 9, a double single tax rate reduction, etc.

In the social sphere it is planned to implement the following innovations: the elimination of ineffective benefits, the transition to targeting and monetization of benefits, the taxation of high pensions, etc.

In the area of Interior Ministry reform it is planned to adopt a new law on police and create a State Bureau of Investigation. Penalties for the payment of wages "in envelopes" will be tightened through the introduction of amendments to the Code of Administrative Offences and the Criminal Code

The government's new economic policy, in particular, envisages de-monopolization of the economy, the doubling of Ukrainian exports, the preparation of agreements on free trade with Canada, Turkey, Israel, the Cooperation Council for the Arab States of the Gulf (GCC), the Economic Community of West African States (ECOWAS), and other countries, as well as the introduction of a new VAT administration system, etc.