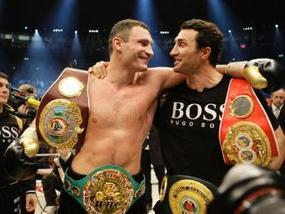 Vitali Klitschko reclaimed the WBC belt and fulfilled a self-proclaimed dream to hold a heavyweight title at the same time as his brother, stopping Samuel Peter in eight rounds Saturday night.

Officials called the fight after eight rounds that saw Peter weaving and occasionally wobbling as Klitschko landed a persistent stream of heavy jabs to Peter's head in front of more than 12,000 people at the new O2 World Arena.
The 37-year-old Ukranian fighter (36-2, 34 KOs) used his height _ he's 6-foot-7 _ and reach to keep Peter crouched and defensive.
Wladimir Klitschko, widely considered the most talented among the chaotic field of so-called heavyweight champions, holds the IBF and WBO heavyweight belts _ and dealt Peter his only previous loss, in September 2005 in a 12-round unanimous decision.
Peter, a 28-year-old Nigerian-born fighter, kept a tight defensive stance and managed to plant a series of solid body shots on his towering opponent. But after eight rounds he hadn't worked consistently inside Klitschko's massive reach.
Klitschko has been WBC «champion emeritus» since a knee injury forced to withdraw from a fight and retire from boxing in 2005.
The honorary status gave him the right to fight Peter (30-2), who won the interim belt in a fight against Jameel McCline last September, whenever Klitschko chose to come out of retirement.
Klitschko is a three-time champion who won the WBC title in 2004 with an eight-round victory over Corrie Sanders. The Peter fight was Klitschko's first since he defended the crown with an eighth-round win over Danny Williams in Las Vegas in 2004.
Klitschko's performances as a powerful puncher have often been overshadowed by injury. In 2005, he withdrew from a WBC title fight with Hasim Rahman because of a torn ligament in his right knee. The injury led him to announce his retirement, and the WBC made him «champion emeritus.» Last fall, he announced a comeback fight against Jameel McCline, only to back out after hurting his back and undergo emergency surgery.

Promoter Don King said after the fight that a logical next step for Klitschko might be to seek a rematch with Lennox Lewis, whom Klitschko lost to in 2003 when a fight doctor called the bout because Klitschko had a badly cut eye.
«What a triumph that would be for us old guys,» King said.
Lewis has been retired since 2004.
In an undercard fight, heavyweight Odlanier Solis improved to 12-0 and grabbed the WBC international heavyweight belt by beating American Chauncy Welliver (34-5-5, 13 KOs) in the ninth round. Belarussian Alexander Ustinov (13-0, 11 KOs) dealt a heavy-handed knockout to Detroit's Julius Long (15-10, 13 KOs) in the first round of another heavyweight matchup.