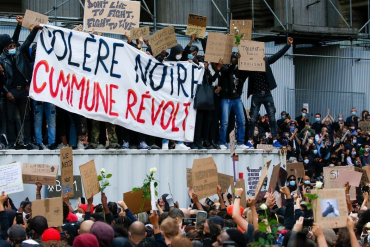 In a quarter of Brussels, Matonge, which is mostly populated by African Americans, today was a demonstration against racism and police violence.

At first, more than 10,000 people simply walked along Polart Square, but towards evening, a peaceful protest rally grew into riots, local media reported. Video from the scene was posted on YouTube by the anti-terrorist group Daesh Hunter.

Demonstrators raided shops, beat and set fire to police cars, and threw stones and bottles at police officers. By the end of the evening, a water cannon was driven to the scene to disperse the crowd of protesters, and a police helicopter was launched over the square. Closer to night, they managed to establish a situation; about 30 police officers remained on duty at the scene of the protests.

Then Brussels was, to put it mildly, not very located to our water cannon.

Therefore, it would be good for the Ukrainian authorities to either condemn today's water jet in Brussels or at least cancel the former police officers for the same search.

And the Brussels authorities can be advised to kneel down and kiss the sneakers for peaceful rioters - so that their remorse can be clearly seen!