Ready to Move in with Your Partner? Read This First 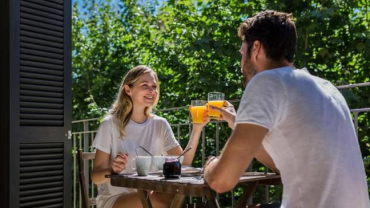 It's an exciting time: you and your other half have just decided to move in together. It's a pretty big deal and one you should be looking forward to. But beware that reality might be a little bit different to the romantic fantasy you're dreaming of, so it's worth getting to know what you might be in for.

Firstly, it's important to know that moving in together will change your relationship in a lot of ways, you'll learn all about the other person and some of what you learn might not be what you expect or want. There will definitely be changes for the good but there might also be a few downsides too, so it's important to prepare.

Luckily, social media has made it easier for couples to share their successes, horror stories, and advice. And there is plenty to share.

When it comes to the biggest niggles that couples living together hair seems to be a pretty big deal. Comments on the discussion group Reddit were pretty open about this topic: 'Hair. Hair everywhere' was one comment. Someone else said 'With the amount of hair in my home, my spouse should be bald by now. I can get it.'

It seems that excess hair is a problem for around 65% of couples according to a survey conducted by Mega Removals, and it's not just women's hair that's the issue. One woman claimed 'His hair is something I see…everywhere. In the sink. In my food. Everywhere'.

But this was nothing compared to the issue of different standards of cleanliness; research from Mega Removals found that 81% of couples argue over cleaning and household chores. But it's not always women complaining about men, one guy had this to say: 'When I lived alone, my flat was always immaculate. Girlfriend moves in and dirt and dust accumulate everywhere'.

Luckily it's not all doom and gloom, around 40% of couples found that their habits actually improved when they moved in with their partner. Someone said that 'After my gf moved in, I realized I'm a slug who doesn't like cleaning up after himself. So now I am motivated to do some house cleaning chores'.

Hair and cleanliness aside, a lot of people found that moving in together meant a loss of privacy, less time to themselves, and an unwanted intimate knowledge of their partner's bathroom schedule. Some couples agreed that there is definitely 'too much information' being shared when you move in.

But on the upside, a lot of people found that it really makes them appreciate their partner more, especially when they go away. One chap said 'When my gf is out of town I can play tons of video games and get hammered. I start to miss her terribly only after a day of doing this'.

So it turns out absence really does make the heart grow fonder, as someone summed it up: 'I miss them at home without them there'.

Other hot topics that people discussed including spending time with friends; around 32% of couples found that they spent far less time with their 'own' friends after moving in with their other half. Many also found that time spend together also dipped, with people mentioning that they quickly became 'complacent' about their better half always being around.

But on the whole most couples agreed that despite the downsides, it was definitely better living with their spouse or partner, than without them.