The U.S. and NATO promised to protect Ukraine. If Ukraine is the aggressor, all bets are off. 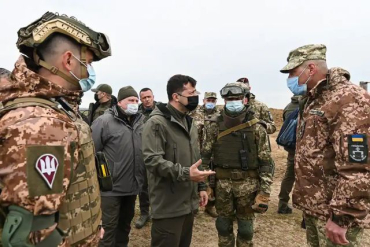 U.S. assurances assume Moscow would attack Ukraine — and Russia’s recent military buildup on Ukraine’s border has highlighted this concern. But what if Ukraine sparks the war? Our research suggests a future crisis could leave Kyiv in a losing fight against Russia without Western support. Here is why.

While Moscow asserts Crimea is part of Russia, Kyiv — and most of the international community — say Moscow illegally annexed this part of Ukraine. Armed rebels still control the Donbas region in eastern Ukraine, after fighting off Ukrainian government forces in 2015 with unofficial Russian help. Moscow has rejected the rebels’ requests to merge the breakaway regions with Russia but vows to protect Russian-speaking minorities there.

Zelensky’s government seeks a bloodless return of both the Donbas and Crimea — which Ukraine considers “temporarily occupied territories,” but is also prepared to fight to this end. Ukrainians have been in a hybrid war against Russia since 2014, marked by sporadic military clashes between the Ukrainian forces and Russian-backed rebels and persistent nonmilitary confrontation, including disinformation campaigns.

Faced with falling public approval ratings, Zelensky has become tougher on Russia. In February, his government devised a new strategy for ejecting Russian “occupiers” from all of Ukraine. In a speech to the Ukrainian people in March, Zelensky summarized the nonmilitary and military measures outlined in the “Strategy of De-occupation and Reintegration of Crimea and Sevastopol” in three words: “Ukraine fights back.” Kyiv also refuses to give autonomy to the breakaway Donbas region and wants to renegotiate the 2015 Minsk II peace deal brokered by Germany and France.

Zelensky’s strategy relies on the “creation of an international coalition” to support his government’s efforts to recover Crimea and the Donbas. In April, he urged Western nations to support his country “not just as partners, from the stands, but as players on the same team, directly on the field, shoulder to shoulder.”

Why would Kyiv escalate?

If tensions rise in the Donbas or other regions with ethnic minorities, as they did in 2014, Ukraine’s leaders would face a decision on whether to use military force. Some would worry that military restraint would risk further division of Ukraine. “The advice ‘not to provoke the Russian Federation’ in 2014 led to the loss of Crimea and certain areas in Donbass,” according to Ukraine’s defense minister Andrii Taran.

Others could see the crisis as an opportunity to achieve broader “de-occupation” objectives to reverse the status quo in the Donbas and Crimea. A military victory could provide Kyiv with leverage to negotiate a new peace deal on more favorable terms.

Kyiv’s calculus would probably be influenced by Ukraine’s military strength and its reading of Western support. Ukraine’s leaders assert their armed forces are ready for war. After military defeats in 2015, Ukraine has been modernizing its forces with Western financial and technical support. But while Ukraine’s military could be strong enough to defeat insurgents on its own territory, it cannot win in a direct clash with Russian forces.

Kyiv’s theory of victory would rely on using the threat of U.S. military intervention to deter Moscow from sending troops across the Ukrainian border. If Ukraine were a NATO member, alliance security guarantees would further increase Kyiv’s chances of defeating the rebels, while keeping Russia at bay.

Over the last three years, we war-gamed possible U.S., NATO and Russian responses at King’s College London, the U.K. Defense Academy and Lawrence Livermore National Lab. In these experiments, 46 current and former U.S. and European officials and experts made 32 strategic decisions in a realistic crisis scenario involving civil unrest that led to Ukrainian defensive military actions. A team of 17 experts judged these scenarios would produce 19 outcomes of varying likelihoods.

Here’s what we found. In the initial phase of the crisis, the United States and its allies politically supported Ukraine. However, in all game iterations, allies sought Kyiv’s restraint and did not intervene militarily to repel Russian military actions against Ukraine. Instead, they doubled down on deterring Russian attacks against their own territories. In some cases, countries’ show of force inadvertently put NATO and Russia on the brink of war, which they later managed to avoid. The consistent result: Russian military victory over Ukraine.

Don’t miss any of TMC’s smart analysis! Sign up here for our newsletter.

Gameplay data show that the United States and its allies were unwilling to risk a direct war with Russia over Ukraine. NATO saw direct intervention as outside its mandate, as Ukraine is not a member of the alliance. Uncertainty about Ukraine and Russia’s intentions in this type of crisis also played a role. Even though allies condemned Moscow, they still saw Kyiv as the provocateur.

Some players said they were “watching a slow-moving train wreck” with “no tools to intervene,” but would have taken action had this not been “such a tough military situation to solve.” Others said their reactions might have been different if Russia was beyond doubt the aggressor.

How valid are these results? A former U.S. undersecretary of defense said the game he participated in was “among the very best in replicating high level decision-making in the real world.”

This creates a deterrence dilemma

Ukraine and the West have different interpretations of what support for Ukraine’s sovereignty and territorial integrity means in practice. In a deepening crisis, there are logical reasons Ukraine’s leaders might launch a military attack, and see this as fighting back. Yet these war-game scenarios show that if Kyiv takes military actions that provoke Russia, the West is unlikely to defend Ukraine.

This scenario reveals a deterrence dilemma for the United States and its allies, who seek both Moscow and Kyiv’s military restraint. Assurances could embolden Ukraine — creating political and military risks U.S. and European leaders may not be prepared to accept. Conversely, signs the West would not intervene could embolden Russia.