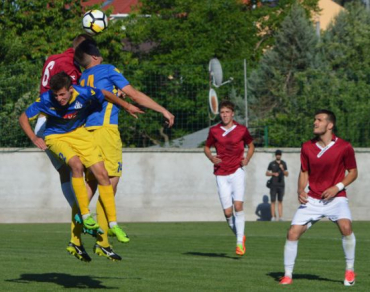 Uzhhorod approached this match as a clear favorite, with its starting eleven including two young and promising players: Ilchuk and Kurtanich.

The start of the game, however, was far from what the hosts could have hoped for as Obolon took the lead in the 5th minute already when Lemko assisted Glybchuk, who curled a lovely shot into the near corner - 0: 1.

However, the away team did not have much time to celebrate as after four more minutes the score was even: Trofil knocked the ball out of the goal area at Gritskevich who managed to take his best chance with a spinning close-range effort - 1: 1.

Two minutes later Uzhgorod were ahead. Dudash, having tricked two defenders on the right flank, assisted to Grytskevich, who was not the one to miss the net - 2: 1.

Nobody would have believed this was just a start, but after a similar assist from Chumak in the 15th minute Mashtalir easily sent the ball past the goalkeeper - 3:1. The very next minute, Grytskevich scores another one -  4: 1. In 18th minute Dudash assists Kovach who proves his fans that their team can achieve an even better result: 5: 1.

The rest of the match fully belonged to the home team as Uzhgorod felt unstoppable having scored eleven more goals by the 89th minute. According to stakers.com, the match finished with 16:1 score.

All in all, the spectators who attended the Avtomobilist stadium had a chance to witness an impressive performance of their home team, while Dudash and Gritskevich managed to improve their rankings in the list of scorers.

It's wonderful that you are getting thoughts from this piece of writing as well
as from our dialogue made at this time.

Vote up!
Vote down!