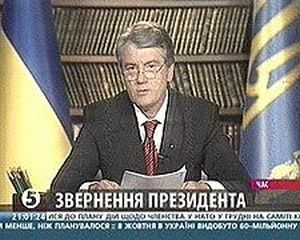 The vote will be the third parliamentary election in less than three years and deal a severe blow to an economy already battered by the global financial crisis. The date of the election has not yet been announced.

"I am deeply convinced that the democratic coalition was ruined by one thing _ the ambition of one person, the hunger for power ... and the dominance of personal interests over national ones," Yushchenko said.

The address had apparently been recorded in advance as Yushchenko was in Italy on an official visit. The announcement was likely to spark protests from Tymoshenko, who had sought to cling on to her job.

Tymoshenko said calling an election before late November would be unconstitutional and has vowed to challenge such a decision.

Yushchenko defended his decision as the only way to preserve the country's democracy and national interests. "They wanted to turn us back and then, as now, I am defending our future," Yushchenko said. "The vote will be democratic and lawful."

The main hero and heroine of the 2004 Orange Revolution pro-democracy protests that propelled Yushchenko to power and put Ukraine on a pro-Western course, Yushchenko and Tymoshenko have turned into vicious rivals.

Yushchenko pulled out of the their nine-month-old coalition last month, after Tymoshenko sided with the opposition to trim his powers and over disagreements related to ties with Russia.

Tymoshenko says Yushchenko's plan to dissolve parliament was aimed at sidelining her as an opponent in the 2010 presidential vote.