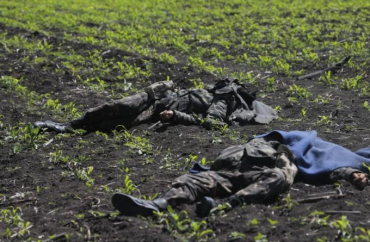 A total of 258 servicemen of the Ukrainian government forces have been killed, 922 wounded, and 45 captured since the start of the anti- terrorist operation in the eastern part of the country.

"As many as 258 servicemen have been killed and 922 injured over the time the anti- terrorist operation has been conducted. Forty-five of our servicemen are in captivity as of now, including two pilots from the An-26 plane that was shot down," Ukrainian National Security and Defense Council spokesman Andriy Lysenko said at a press conference on Tuesday evening.

Two soldiers were killed and six wounded in the small hours of Tuesday when government forces deployed near the town of Amvrosiivka, Donetsk region were shelled by Russian missiles, according to Vladislav Seleznyov, spokesman for the counterterrorism operation headquarters.

"The missiles came from Russian territory," the spokesman said. The Information Resistance group reported civilian casualties as a result of an air strike on residential areas in the town of Snizhne, Donetsk region on Tuesday morning. "Since Monday morning, when a Ukrainian transport plane was shot down, there had been no sorties of Ukrainian Air Force aircraft, and Donetsk militias have no aircraft, so the air strike definitely came from Russian aircraft," the report said. As we have reported, an Antonov-26 military transport plane with 8 crewmembers and humanitarian cargo on board was shot down on Monday. The crew bailed out before the plane crashed. Two crewmembers were captured by militants and the rest were unaccounted for as of 2 p.m. Tuesday. According to Andriy Lysenko, spokesman for the National Security and Defenсe Council, the plane was flying at a high altitude where not a single SAM used by terrorists could have reached it. "The plane was hit at an altitude of 65 hundred meters. It was hit either by a surface-to-air missile launched from a Russian ground-based antiaircraft system or by a self-guided air-to-air missile fired from a Russian aircraft that may have taken off from an airbase in Rostov oblast, Russia," Lysenko said at a news briefing in Kyiv.

"Several residential areas in Luhansk came under volley missile fire on Monday evening. A cafe, a market, and dozens of private houses were completely destroyed, several civilians were killed and dozens were wounded," the Interior Ministry's press service reported on Tuesday.

According to the report, Russian TV crews immediately turned up at the scene and started shooting the ruins. Locals told them that they had seen missiles flying from the part of the city controlled by militants, but the Russian reporters claimed the area had been shelled by government forces. On Tuesday, Luhansk Mayor Serhiy Kravchenko declared a three-day mourning for civilian victims and offered his condolences to their families. According to him, at least 17 civilians have been killed and more than 70 have been wounded by bullets and shell fragments over the past three days.

Six Ukrainian servicemen have been killed and 13 injured during the fighting in the zone of the counterterrorism operation (ATO) over the last 24 hours, Spokesman for the information and analytical centre of the Ukrainian National Security and Defence Council Andriy Lysenko said this at a briefing on Tuesday.