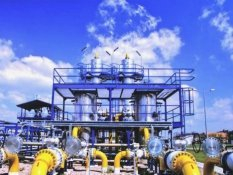 The Russian Energy Ministry has confirmed an interim gas price for Ukraine at $378 per 1,000 cubic meters, reads a statement posted on the ministry's website.

"Now we have reached a position where the price will be determined by the formula directly stipulated in the contract. This formula is influenced by the price of oil, which has fallen significantly," he said.

On October 29, another round of trilateral gas consultations involving Ukraine, the EU and Russia in Brussels lasted for ten hours. The parties agreed to continue the talks on Thursday at 20.00 Moscow time.

Earlier reports said that Gazprom's delegation had left the negotiations in Brussels and returned to Moscow. Gazprom spokesman Sergei Kupriyanov said that the Russian side was waiting for information on the course of negotiations between the European Commission and Ukraine, including "movements on a bilateral Ukraine-EU protocol" that would envisage financial guarantees from the EU for the payment by Ukraine for Russian gas.

Later Gazprom reported on its Twitter page that the Russian delegation had returned to Brussels to continue trilateral gas negotiations.