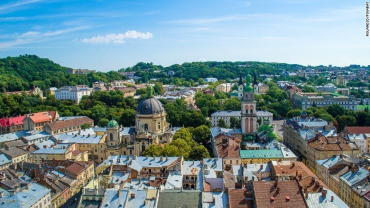 It's one of the biggest countries in Europe, but even when it isn't hosting the annual song spectacle that is the Eurovision Song Contest, Ukraine struggles to attract visitors.

Recent political, territorial and economic difficulties have done little to burnish the image of a former Soviet nation struggling to find its identity between Russian and western European influences.
Nevertheless, Ukraine is home to a host of beautiful places with a great range of tourist activities. And while some regions are advised as off-limits due to separatist clashes, most of this vast country is open for business.

Vibrant cities, ancient castles, stunning countryside, diversity of landscapes and a welcoming attitude all help make it a special destination, regardless of its troubles.
The lack of mass tourism lends Ukraine a charm and authenticity often missing elsewhere.
Here are 11 places that will make you fall in love with this eastern European country.
Lviv

The Black Stone House, built in 1588, is one of Lviv's most famous buildings.
Seen as Ukraine's cultural capital, Lviv has the most western architecture of all the country's cities.
It boasts a splendid UNESCO-protected Old Town renowned for beautiful narrow streets, magnificent churches, fascinating museums and charming atmosphere.
It's cozy and welcoming, offering a wide range of themed restaurants, cool bars and great nightlife.
No matter the season, it's popular with Ukrainians who come here for a weekend to feel the Old Town vibes.
Ukraine extra: Lviv is famous for its knaipas -- local pubs that serve drinks and food. One of the most curious ones is Gasova Lampa (Gas Lamp) -- a museum-restaurant with one of the biggest collection of gas lamps in Europe. (Gasova Lampa, 20 Virmenska St, Lviv; Ukraine; +380 50 371 0908).
As a day trip from Lviv, visitors can follow the Golden Horseshoe route: a tourist trail around the most prominent regional castles -- Olesko Castle, Zolochiv Castle and Pidhirtsi Castle.
MORE: 10 abandoned hotels for the curious traveler to check out
Chernivtsi
Nicknamed Little Vienna for the rich Austro-Hungarian architectural heritage, Chernivtsi is one of the gems of western Ukraine.
There's the stunning UNESCO-protected building of Chernivtsi University, romantic walks and charming Vienna-style cafes.
Lovers of Art Nouveau architecture can explore the elegant frescoes and beautiful interiors of the Chernivtsi Museum of Art (Teatralna Square, 10, Chernivtsi; +380 3722 26071).
With a history of multiculturalism and constantly changing jurisdictions, the city is one of the most interesting destinations in the country.
Ukraine extra: One of the best coffee shops in the city is the charming Chashka (Stepana Bandery St, 9, Chernivtsi, Ukraine; +380 50 972 8888).
Sofiyivsky Park in Uman
One of the most prominent examples of European gardening design dating back to the early 19th century, Sofiyivsky Park is a unique Ukrainian natural attraction.
It was founded by Polish noble Stanisław Potocki as a birthday gift to his wife Sofia.
The extensive park is home to waterfalls, lakes, statues, fountains, antique grottoes and artificial ruins, and is a perfect place to enjoy a relaxing walk surrounded by natural beauty.
Ukraine extra: Another picturesque example of 18th-century landscape design is Olexandriya Park in Bila Tserkva, a small town near Kiev.
READ: The extreme adventures on Earth
Kiev

Kiev, Ukraine's capital, is a vibrant destination filled with golden-domed churches.
Golden domes of superb churches, a long and rich history, eclectic architecture and nonstop city life make Kiev a go-to spot for all travelers visiting Ukraine.
Kiev is one of the most prominent cities in eastern Europe and its sights include two UNESCO World Heritage sites in Kiev Pechersk Lavra (Monastery of the Caves) and St. Sophia Cathedral.
There's also the Andriyivskyy Descent -- a steep and historic street paved with cobblestones -- and the awe-inspiring and gargoyle-smothered Art Nouveau-style House with chimaeras.
Ukraine extra: A good authentic local street snack is perepichka -- a fried bun with sausage inside. It's served from the window on Bohdana Khmelnytskoho Street, easily recognized by the long line (Kyivska Perepichka, Bohdana Khmelnytskoho St, 3, Kiev).
The Museum of Folk Architecture and Ethnography in Pyrohiv, south of Kiev, is one the biggest open-air museums in Europe. (Museum of Folk Architecture and Ethnography, Pyrohiv, Akademichna St, Kiev).
Mukacheve
This charming little destination in the western Zakarpattia region has a compact old town full of Austro-Hungarian architecture overlooked by the impressive castle that stands on a nearby hill.
Once one of the most important fortresses in the kingdom of Hungary, Palanok Castle is now a highlight of Ukrainian tourism.
Mukacheve is also a great starting point for exploring the natural wonders of the Carpathian mountains, including Synevir Lake and picturesque Shypit waterfall.
Ukraine extra: Dessert with a coffee at Bondarenko Confectionery House will complete any Mukacheve experience. (Dostoyevskoho St, 11, Mukacheve)
MORE: What are the hot travel destinations of the future? Iraq? Iran? North Pole?
Pereiaslav-Khmelnytskyi
Often referred to as the City of Museums, Pereiaslav-Khmelnytskyi, about 50 miles southwest of Kiev, is home to no fewer than 24 venues hosting a wide variety of artifacts.
Among them are the Museum of Bread, the Museum of Rushnyk (traditional Ukrainian ritual cloth), the Museum of Space and the Museum of Ukrainian National Dress.
But the most impressive of them all is a large open-air Museum of Folk Architecture and Rural Life exhibiting unique objects from ancient times until the beginning of the 20th century.
Ukraine extra: Across the mighty Dnieper River that divides east and west Ukraine sits the little city of Kaniv.
Here can be found the Shevchenko National Reserve, devoted to one of the greatest Ukrainian writers Taras Shevchenko. The hills of the reserve offer breathtaking views over the river.
Kharkiv

The Mirror Stream is a UNESCO-protected site in Kharkiv surrounded by a picturesque park.
Once the capital of Ukraine and now its second city, Kharkiv is a city of students who drive the thriving restaurant and bar scene.
There are enough museums and culture to make Kharkiv an interesting eastern Ukrainian destination.
Freedom Square is one of the largest squares in Europe, while the Derzhprom building is one of the most famous examples of constructivist architecture.
Completed in 1928, it was the most spacious single structure in the world at the time.
Ukraine extra: One of the coolest bars in Kharkiv is Starik Hem. With quirky Hemingway-inspired design, great drinks and overall affordability, it is one of the best places in the city (Svobody St, 8, Kharkiv; +380 57 714 1212).
READ: It's hot: Chernobyl now a tourist zone
Chernihiv
Chernihiv is one of the oldest cities in Ukraine, and was once a prospering and important center of medieval Kievan Rus, the first East Slavic state.
There are unique examples of medieval Slavic ecclesiastical architecture, and one of the oldest churches in Ukraine -- the Transfiguration Cathedral, which was completed in the 11th century and features stunning frescoes and ancient interiors.
Chernihiv is home to a third of all the eastern European historic landmarks period before the Mongol invasion.
Ukraine extra: One of the best places to try varenyky (traditional Ukrainian filled dumplings) is the Varenychna restaurant.
The 18th-century Kachanivka Palace is a popular excursion from either Chernihiv or Kyiv. It's a beautiful neoclassical mansion surrounded by well-preserved English gardens with a lake and artificial antique ruins.
Varenychna, Myru Ave, 21, Chernihiv, Ukraine
Odessa

Odessa celebrates the Humorina Carnival, or festival of humor, each year on April 1.
As one of Ukraine's largest seaports and trade hubs with a beautiful historic district, Odessa has plenty of treasures waiting to be discovered.
The central part of the city is packed with sights, while architecture lovers can admire the splendid palaces and unique blend of building styles.
For sea enthusiasts, Odessa offers kilometers of Black Sea beaches and lots of entertainment both during the day and night.
Ukraine extra: One of Odessa's best restaurants is Bernardazzi set in the building of the Odessa Philharmonic (Bunina St, 15, Odessa).
Odessa is also home to one of the most beautiful theater buildings in Europe -- the Odessa Opera and Ballet Theater built in the 19th century by Austrian architectural studio Fellner & Helmer (Tchaikovsky Lane, 1, Odessa).
MORE: 23 beautiful reasons to visit South Africa
Uzhhorod
This little city right on the border with Slovakia has belonged to five different countries in the last 100 years.
Its historical affiliations can be seen throughout Uzhhorod's central district where you'll find Czech functionalist buildings standing next to classical Hungarian mansions, or Russian Orthodox, Catholic and Greek-Catholic churches in close proximity.
Uzhhorod is the vibrant hub of the Zakarpattia region and the gateway to the Carpathian mountains, easily reached from the major central European cities.
Ukraine extra: For the best museum in the region head to Uzhhorod Museum of Folk Architecture and Rural Life (Kapitulna St, 33A, Uzhhorod) to see unique 16th-century wooden St. Michael's Church and other magnificent examples of local architecture.
The best desserts in the city can be found in confectionery house Valentin & Valentina Shtefanyo (Dukhnovycha St, 16, Uzhhorod).
Kamianets-Podilskyi
For spectacular views and cozy old-town vibes, Kamianets-Podilskyi is worth further exploration.
This little town in the western part of the country has one of the most breathtaking fortresses in eastern Europe. It stands majestically on an island surrounded by a canyon and encircled by the Smotrych River. Apart from the castle, Kamianets-Podilskyi is famous for the festival of hot-air balloons that is usually held in the late spring.
Ukraine extra: Another magnificent castle can be found in the nearby city of Khotyn. Khotyn Fortress is considered to be one of the most picturesque and most visited castles in Ukraine (Fortechna St, 1A, Khotyn). It has been a setting for many Soviet and Ukrainian historical movies because of its authentic atmosphere and majestic views.