Are the American “ears” of Joe Biden and Donald Trump sticking out because of the Ukrainian “six million”? 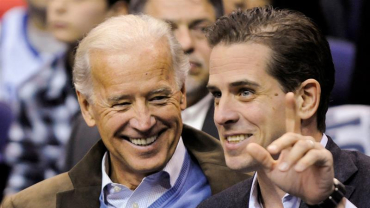 In the "intrigue about six million dollars", which has been shaking the public consciousness of Ukraine for the third day, many scenarios can be traced.

On June 12, at 18.40, at the exit from the parking lot of the State Tax Service (STS) in the city of Kiev, two cars were blocked by the special anti-corruption bureau of Ukraine (NABU), one of which belongs to the deputy head of the STS for Kiev Mykola Ilyaschenko. There they discovered 6 million dollars in cache. Hundred dollar bills, mostly old.

To date, the official version presented in a joint press conference of NABU chiefs Artyom Sytnik and the Specialized Anti-Corruption Prosecutor's Office (CAP) Nazar Kholodnitsky is as follows: the partners of the former Minister of the Environment in 2010-2012 and the beneficiary of the well-known Ukrainian gas producer Burisma Holdings decided to give him a gift on his birthday (June 14) and close the criminal case of 2013, which was in the SAP and on which the suspicion of Zlochevsky was announced. Then, the state allocated a “stabilization loan” to the “Real Bank” associated with Zlochevsky, “which is then wrapped up in favor of the accomplices of the crime by withdrawing funds abroad and turning them into cash”. Damage to the state amounted to 787 million hryvnias, 97 million dollars at the exchange rate for May 2013.

For the "excuse" of Zlochevsky, $ 6 million was generated in cash, five of which were intended for Kholodnitsky, and one planned to take Ilyaschenko to organize the transfer of money for "services". Which was detained along with money (eight large plastic bags full of bundles of hundred-dollar bills).

In less than two days, the number of versions of the incident went wild:

NABU provocation,
"Spin" of the largest private gas producer in Ukraine;
the attack of Sytnik and Kholodnitsky (under which their office chairs are clearly shaky) against the Prosecutor General of Ukraine;
attack on the head of the Office of the President Andrei Yermak and much more.
But the natural and, in my opinion, the most justified version of events is the "American democratic footprint." Because he should be sought wherever Burisma’s word appears: after all, he served there, and for a good salary, Hunter Biden, the son of the current candidate for the White House from the Democratic Party. Yes, and Joe Biden himself is anointed in this matter. And the current "six million case" is a solid Burisma. And although the company itself claims that “its management has nothing to do with the bribe to the leadership of anti-corruption bodies for closing the criminal proceedings,” the legal director of Burisma, Andrei Kicha, has been named the initiator of the bribe at this stage.

Therefore, it is not surprising that the first question to Kholodnitsky was related to the Biden. The chief of SAP answered categorically: “Let's put an end to this once and for all. Biden Jr. and Biden Sr. do not appear in this particular production. ” But it’s hard not to pay attention to the words “in this particular production” and not to ask the question - will there be others?

Lord, of course they will! Trump declared Ukraine “the main problem of the presidential campaign” and promised to constantly raise Ukrainian issues. Because he does not believe that Biden’s father and son can answer them.

And the Democrats somehow unexpectedly nervously reacted to the information about six million. Messages about it were posted by leading media outlets, and everyone unanimously emphasized:

“Ukrainian officials on Saturday said they were offered a $ 5 million bribe to complete the investigation into the founder of the energy company Burisma, but said it had nothing to do with former board member Hunter Biden, whose father is running for president of the United States "(Reuters).
“Ukraine’s anti-corruption prosecutor, Nazar Kholodnitsky, said that none of the Biden’s were connected with an attempt to bribe” (The New York Times).
“Ukraine: a bribe in the investigation of a gas project; not related to the Biden ”(Washington Post).
And just as well, everyone did not notice the “concrete” reservation of Kholodnitsky.

Leading US media are controlled by Democrats. But there is hardly any doubt that those monsters from jurisprudence and political technologies that surround Trump will not be "noticed" by this reservation. Like Giuliani or Bannon, whose contention with Trump is somewhat exaggerated.

Six million “Ukrainian bribes”, an amount that is impressive even for Americans, will inevitably cause a new surge of interest in Burisma, and hence in the Ukrainian “sins” of Joe Biden.