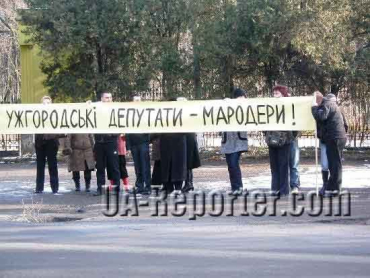 On February 2, the protest action against dirty privatization of the single city swimming pool "Spartak" took place in the regional center of Zakarpattya. 30 Uzhgorod residents participated in the protest action. (photo-report)

The action was arranged by the initiative group of the residents of Uzhgorod, who were indignant by actions of the city Mayor Serhiy Ratushnyak and city officials, who sold the only city swimming pool, built at costs of Uzhgorod residents, at nothing to the private property. Nobody saw the terms of the secret deal on redemption; the target function of the redeemed object is also unknown. Nobody knows what the new owner of the swimming pool will do. It is pleased that there are patriots in Uzhgorod, who are ready to act against illegal actions of the local authorities!

Some people informed to UA-Reporter.com correspondent that they had gathered

This is what Margarita Moshchak, one of the initiators of the protest action, thinks about it:

"Everything started when I saw advertising on land sale on one of the real estate sites. The matter concerned the sale of "Spartak" swimming pool. Later that information appeared almost in all mass media of Zakarpattya, with all detailed comments. So I asked all people, who in some way care about the swimming pool, to gather and express their opinion to the city power.

Our meeting is addressed to all officials who voted for sale of "Spartak" swimming pool and the drugstore No.1 in the center of the city, as well as other important objects. We hope that the corresponding services will make conclusions and finally get down to their work."