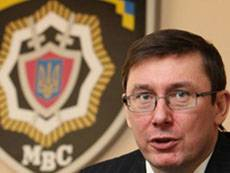 Former Minister Of Internal Affairs Yurii Lutsenko has been detained by law enforcement bodies, the press-service of the People's Self-Defense public movement said in a statement. Lutsenko was detained on Staronavodnytska Street, Kyiv's Pechersk district (he lives there with his family) at 1:55 p.m., according to the press-service.

"Lutsenko went out with a dog, turned behind the corner of the building where there are no surveillance cameras and was detained by 11 SBU officers in masks. According to the preliminary data, Alfa militants seized him, took into a minibus to an undisclosed destination," the press-service noted.

The officer of the Prosecutor General's Office who was in the scene of arrest emphasized that Lutsenko was detained under the charged offence.

As Ukrainian News reported, Yurii Lutsenko on December 22 said the Prosecutor General's Office denied him reading 22 of 23 volumes of the criminal case instituted against him.

He supposed a reason for the refusal might be fabrication of the case materials.

Yurii Lutsenko claimed impossibility of learning files of a case opened against him on December 20 because his lawyer was then advocating former economy ministry Bohdan Danylyshyn.

The PGO said on December 13 said it had completed the investigation of the criminal case it filed against former interior affairs minister Lutsenko on suspicion of embezzling state property by approving a directive on payment of UAH 40,000 from the Pension Fund to his driver.