Freedom of Speech and Journalism in the US: Horror Without End 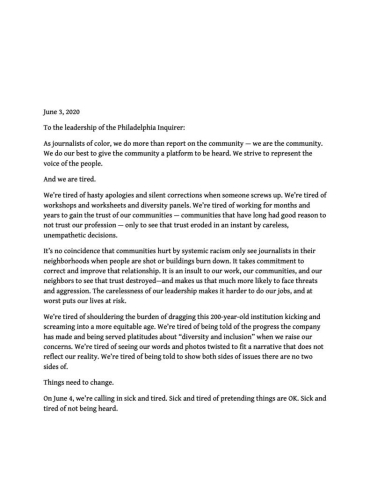 Because of the publication in the New York Times of the column of Republican Senator Tom Cotton calling for the use of troops to restore order, an interesting controversy erupted. The newspaper recalled the material and disowned it, because it does not meet the standards, and the blame was placed on the editor of the Opinions department. He allegedly did not read it before publication. The leadership of the newspaper promises to take measures so that this does not happen again.

A debate arose about what pluralism is. The most interesting document in this regard is an open letter from the black staff of the Philadelphia Inquirer newspaper to the management of the publication. They express their indignation at the unsatisfactory state of affairs in the field of presenting information, write that they are "sick and tired" of what is happening when something is wrong, and then they hastily apologize for it and change it without publicity.

The most interesting, however, is the following: “As color journalists, we do more than just talk about the life of this community. We are this community. We are doing everything in our power to give the community a platform from which it will be heard. We strive represent the voice of people. " And most importantly: "We are tired of listening to the need to show two sides of phenomena that do not have two sides."

This is very symptomatic. Previously, the journalist’s detachment from the events described and the compulsory presentation of the parties' points of view were taken for granted as the norm of quality journalism. Just as it was implied that in any conflict these parties exist. Apparently, this, too, is a thing of the past, like many other rules of the past world.